The Marine Protected Area of Pelagie Islands is an important marine biodiversity hotspot in the Mediterranean Sea, extending altogether 4,136 ha, and including the marine coastal areas around the islands of Lampedusa, Linosa and the small island of Lampione. It was established by the Ministry of the Environment and entrusted with the provisional management to the Municipality of Lampedusa and Linosa. The area has also been designated as a Natura 2000 site as Special Area of Conservation and Special Protection Areas (SPA)
In the context of the conservation objectives of the MPA, Posidonia oceanica is one of the main objectives for conservation besides preserve two priority species, the sea turtle Caretta caretta and the common dolphin Tursiops truncatus. Other species of conservation value are benthonic and therefore strongly dependent on the habitat they live in.

According to the measurements made at the ENEA Station for Climate Observations on the island of Lampedusa, a significant inter-annual variability is evident in the temperature record, started in 1999, with particularly warmer summers in 2003, 2009, 2012, and 2015. Similarly, warm winters has been recorded particularly in 2006-2007 and 2009-2010. The most evident long-term increases occur for CO2, N2O, and CH4. The amount of CO2 has increased by more than 40 ppm over last 23 years.

The seawater temperature averages detected by Lampedusa station from the ISPRA national sea network from 2010 to 2017 have been higher particularly during the 2012 and 2015 summer seasons.

Lampedusa island is characterized by a carbonate substrate that undergoes progressive erosion. Observations indicate that erosion has increased in the last 10 years. On the other hand, Linosa island has a volcanic substrate and its capacity to tackle erosion is higher. 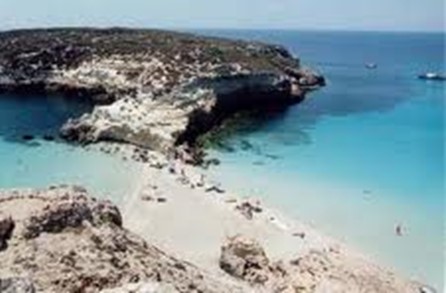 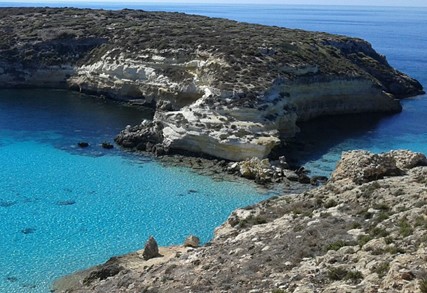 The impacts of climate change are locally visible, particularly with regard to the arrival of warm affinity species, such as two species of macroalgae Caulerpa cylindracea and Lophocladia lallemandi, and fish fauna, such as the rabbitfish Siganus luridus. Over last years, it has also been reported the presence of the highly toxic pufferfish species, Lagocephalus sceleratus.

Episodic bloom events of jellyfish and harmful algal species, such as Pelagia noctiluca, Rhopilema nomadica and the toxic dinoflagellate Ostreopsis ovata are partically triggered by climate stressors, had been recorded. During winter, large blooms of the jellyfish Pelagia noctiluca had been observed along the coasts of Lampedusa and Linosa (2015, 2017, 2018, 2019). The pictures below were taken in 2015. 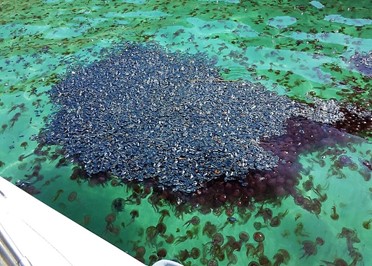 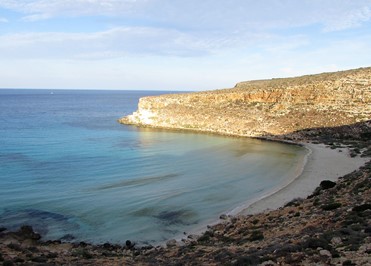 Based on the preliminary results, the adaptation measures for the MPA of Isole Pelagie could be focused on filling the knowledge gaps with scientific data for each habitat. Moreover, it is necessary to increase the stakeholders’ environmental awareness through participative involvement. The engagement with stakeholders promotes transparency and cooperation in decision-making, and assists in the mitigation of conflicts and explorations of possible solutions on the use of marine coastal resources and ecosystem services. Among the initial proposed adaptation strategies:
• Decreasing the tourism impact through specific regulations of: anchoring, trampling, recreational fishing
• Helping to shift to a low-impact fishing for artisanal fisheries, by exploiting different stocks including alien species
• Increasing the monitoring of vulnerable target species to implement conservation measures as extension of protected areas and restricting fish/harvest period
• Enhancing awareness on climate change, invasive species, non-climate stressors impacts and resilience issues.
For more information, please visit the website of Pelagie Islands MPA