The Marine Protected Area (MPA) of Portofino was established in 1999. The Portofino Promontory stretches into the Ligurian Sea for more than 3 kilometers, extending along the coast for about 13 kilometers. Portofino MPA stands out for its luxuriant community of coralligenous and an abundant population of red corals (the most important population of shallow-water corals in the Ligurian Sea). Unlike most coralligenous, which flourish on submerged cliffs and rocks, red corals develop on rocky bottoms, at a depth of 60 to 100m. On the sandy seabed, along the western and eastern slopes of the Promontory, we can find Posidonia beds, home to great biodiversity. Portofino also hosts an important fish population: about 80 species have been recently recorded.

Global warming has direct impacts on local biodiversity; during the summer, the weather sea conditions can cause the sea to reach temperatures above 23°C even at high depths (over 30m). This is a major stressor for benthic organisms, such as gorgonians, which can be victims of mass deaths, as occurred in 1999, 2003, 2006 and 2018. The temperature increase has also an impact on the specific composition of the various fish communities.

Precipitations occur mainly in autumn and spring, with an increasing risk of flood, especially after a drought summer. Although there is still no evidence of a change in precipitation patterns, some signs do reflect this tendency. The frequency and intensity of storms and storm surges appears to be increasing. Storms of extraordinary intensity (such as the one occurring in October 2018) can potentially damage buildings, as well as coastal and marine habitats, such as the Posidonia meadows, and even the fish population. Sedimentation and turbidity are both related to the presence of precipitations, with higher rates in rainy periods (October-January). These stressors have especially negative effects on photophilic algae and Posidonia meadows, which lose their photosynthetic capacity and are suffocated by the sediments. 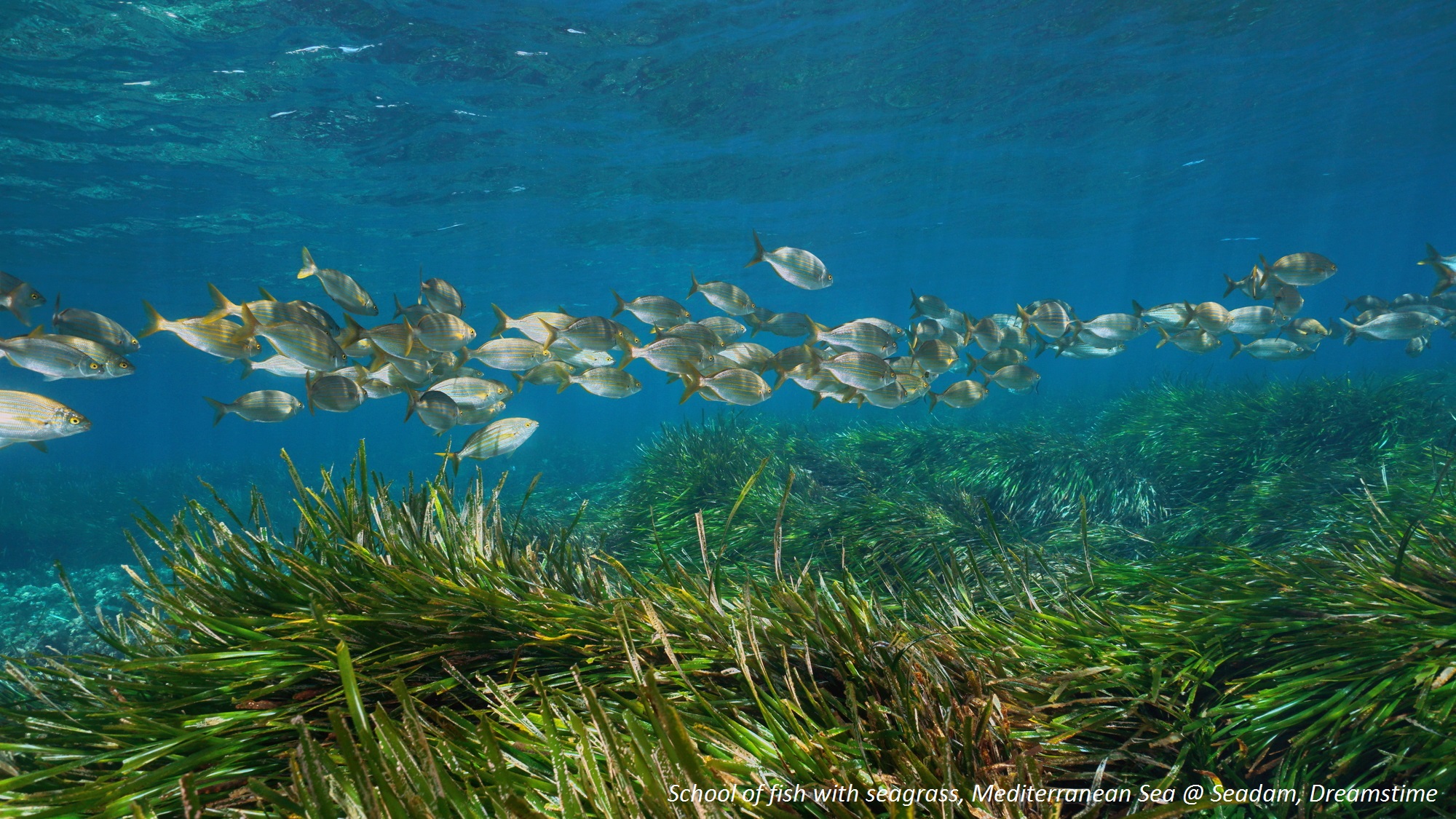 Coralligenous is the most vulnerable and also the most affected habitat due to increasing temperature. The human impact (as for example caused by fishing gear) on this environment can seriously compromise its functionality and make it more vulnerable to climate change. Even if both anthropic and non-anthropic impacts are monitored and well documented, the coralligenous environment is highly vulnerable to climate change and its recovery is particularly slow.

They also show a high level of vulnerability to climate change, mainly due to the impacts of anchorage and sedimentation, that cause significant biodiversity loss and damage the meadows, making them less resistant to extreme storms and more prone to erosion.

Throughout the different seasons, the infra-mesolittoral environment undergoes profound changes, which compromise its functionality even more. Increasing temperature and the subsequent presence of alian algae species (Caulerpa spp. In particular) is the biggest threat, alongside with other stressors such as storms, increasing sedimentation and organic pollution. The growing frequency of particularly intense storms may cause damage to this environment, especially if these occur during the spring season, which is the period of maximum development of the community, as opposed to autumn, when the damages are reduced. The vulnerability of this habitat is high, but less than the coralligenous or the Posidonia meadows.

The vulnerability assessment of this activity utilized data from approximately 600 divers, collected through questionnaires for the evaluation of the natural capital. Diving is heavily dependant on coralligenous, meso-infralittoral habitats and indirectly dependant on Posidonia meadows. This activity is considered moderately vulnerable.

It is only partially vulnerable to climate change. Jellyfish blooms and toxic microalgae are the biggest threats in this sense. In some cases, the effects of climate change can be considered positive. Since the beach surface is limited, a potential increase in erosion in Portofino MPA would only play a marginal role. A major risk factor related to climate change is the the occurrence of extreme weather phenomena, such as floods and storm surges. These phenomena can cause serious damage to the beach infrastructures, roads and habitats, which would mean huge expenses and time to restore them.
The vulnerability assessment was based on data collected through questionnaires by the University of Genoa to evaluate the existing natural capital, together with those carried out during the climate change awareness raising events, organised by Portofino MPA.

The fishing activity is moderately vulnerable to events such as high-intensity storms. Indeed, the wide range of tools used makes local artisanal fishers resilient to different environmental conditions. Despite this, climate change can still affect their activities, limiting the fishing period and making fishing less effective or damaging infrastructure and habitats due to sea storms. The vulnerability of this activity to climate change is moderate. However, when considering non-climatic stressors and current social conditions of artisanal fisheries, the overall vulnerability of this activity is deemed high. For instance, there is little or no generational change, strong competition represented by both the globalized market, which lowers the selling price of the catch and by recreational fishermen, who frequently sell fish to restaurants, which is an illegal practice. 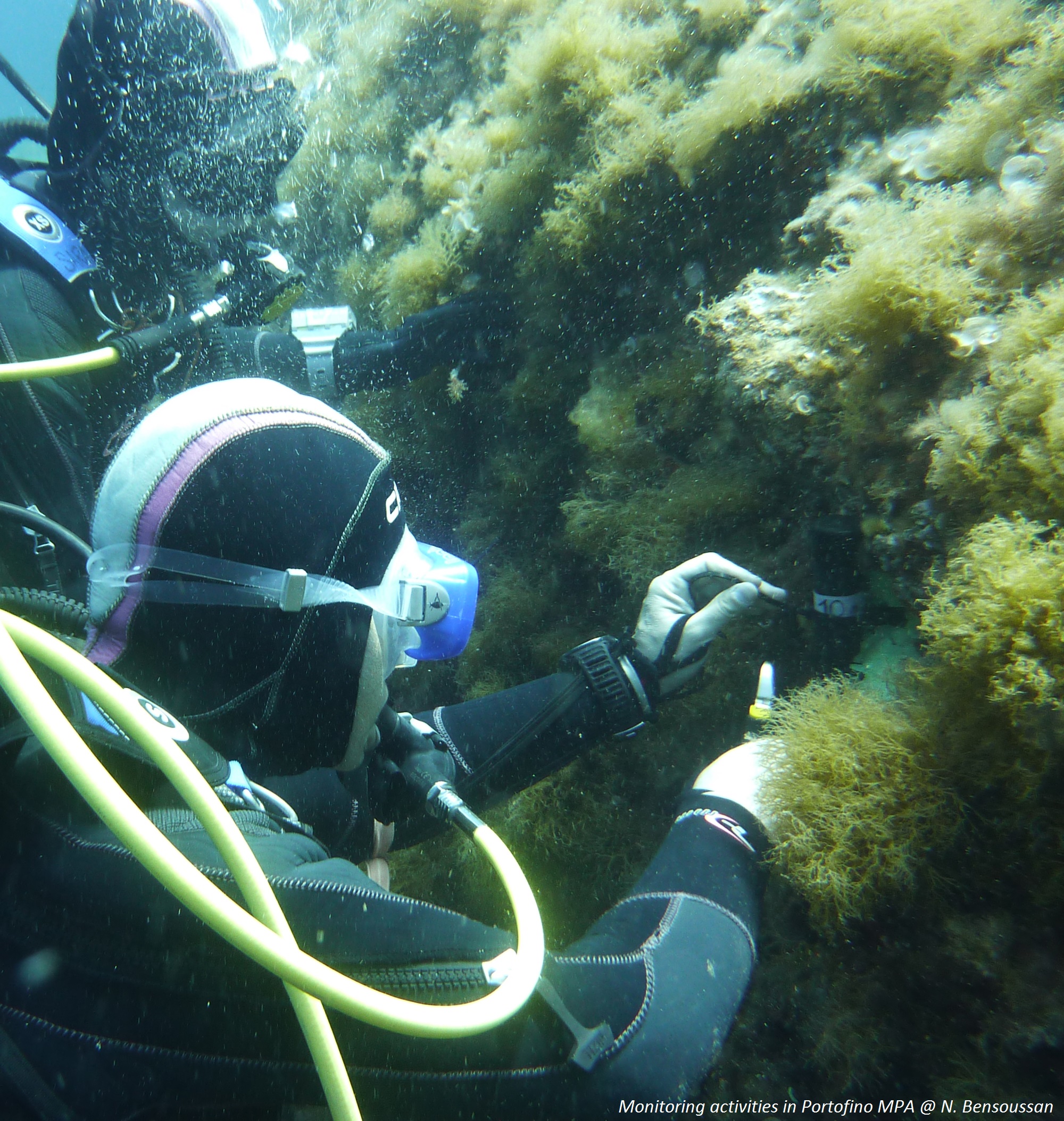 The adaptation activities have already started to be implemented, involving local stakeholders in the monitoring activities. One of the stakeholders’ objectives was to increase the citizen science activity while engaging divers, tourists and both professional and recreational fishermen. This allowed to improve the information available on this MPA. The results can be found in the Vulnerability Assessment of socio-economic sectors report.

Future promotion of good practices, educational activities and dissemination events for tourists and divers will also be carried out by the stakeholders, in order to make citizen science more effective. Besides, artisanal fishermen were ready to support the implementation of restrictions on artisanal fishing to avoid or decrease damages to coralligenous habitats, while divers agreed to close/change diving paths in damaged sites with coralligenous habitats. The artisanal fishermen are also very interested in joining events and activities addressing the consumption of alien species that currently have a lower commercial value, in order to mitigate their impact on the ecosystems.

Regarding future adaptation measures, all stakeholders agreed that all forms of anchoring activity in Posidonia meadows should be forbidden, in order to remove the main source of human impact and the origin of the meadow fragmentation. In fact, fragmented seagrass meadows become more vulnerable to the effects of climate change.
The local stakeholders finally agreed to undertake restoration actions within the MPA: reproduction, breeding and reintegration of rare or endangered species in order to protect the native biodiversity and make the community more resilient to climate change.
For more information, please visit the website of Portofino MPA